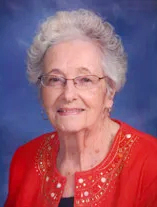 She attended school at Kingsland High School and graduated from Glynn Academy in Brunswick in 1943. Graduating from the University of Georgia in 1947, she began her career as director of welfare in Camden County.

She was married to Joseph M. Rush on May 15, 1949, who passed away after 59 years of marriage. She and Joe lived in Savannah and Macon before returning to Camden County in 1956.

She was a member of First United Methodist Church where she served on the Official Board, choir member, UMW, Sunday school teacher, volunteer at local hospital, charter member of the DAR, Delta Kappa Gamma and Alpha Delta Pi sorority. She taught in Camden County for 25 years before retiring in 1987.

A celebration of life was held at 11 a.m. Monday, Oct. 26, at Kingsland United Methodist Church with Pastor Bruce Vaughn presiding. Visitation was from 10 to 11 a.m. COVID-19 precautions were strictly enforced for the health of all.

Burial was at Lawnwood Cemetery.

Allison Memorial Chapel (St. Marys) in conjunction with Williams Funeral Home (Milledgeville) were in charge of the arrangements.