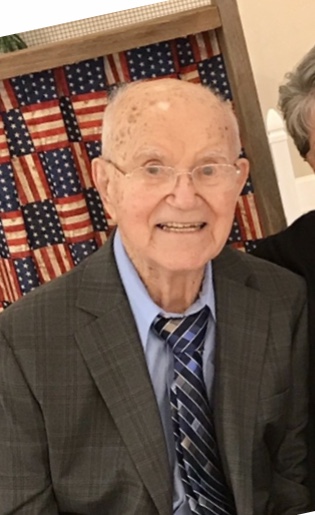 He was born in Painesdale, Michigan, to the late Paul and Mary Senich Kovach but raised in Canton, Illionois. He served in World War II on combat jumps as a member of the 101st Airborne Division, 506th Regiment during Operation Market Garden. He participated in the capture of two bridges and liberation of Eindhoven, Holland. He also spent seven months in a German POW camp after being captured guarding “Hell’s Highway” between Veghel and Eindhoven.

Following the war, he married Oceil Bryant and moved to south Florida before moving to Waycross in the early 1960s. Matthew was a barber by trade and cut hair into his early 90s. He worked in several shops in Waycross including some time with the Scruggs brothers, eventually opening his shop, Country Barber Shop. Some of his hobbies included fishing, reading, gardening and crafts. He was a member of First Baptist Church in Blackshear and former member of Jamestown Baptist Church and Haywood Baptist Church.

In addition to his parents, he was also preceded in death by his wife, Oceil Bryant Kovach; two sisters, Rose Loveland and Emma Kovach; and two brothers, Mike Kovach and Frank Kovach.

He is survived by his daughter, Cindy Kovach of Kingsland; a son, Larry Kovach (Kathy Depratter) of Jesup; two grandchildren, Brian Kovach (Kami) of Gainesville, Georgia, and Laura Kovach Sigers (Ben) of Valdosta.

A funeral service will be held at 3 p.m. Saturday, Feb. 8, at the Music Funeral Home Chapel. Burial will follow in Greenlawn Cemetery. The family will begin receiving friends at the funeral home on Saturday at 2 p.m.

Sympathy may be expressed by signing the online registry at www.musicfuneralhome.com.

Music Funeral Home is in charge of the arrangements.