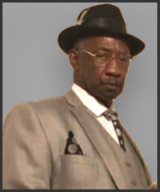 Earl Jerome Nightingale was born April 27, 1953, in Kingsland to the late Oliver and Margaret Nightingale. Throughout his life, he was affectionally known as “Pluck.” At an early age, Earl became a member of the Evergreen Missionary Baptist Church, which he and his family attended church and Sunday school every Sunday.

He owned and operated P.C. Barbeque in Kingsland until his health began to fail. He was a recreational coach for the “Little Wildcats.”

He joined Refreshing Oasis Church in 2012 under the leadership of Dr. Mack De’Von Knight. He served in the deacons’ ministry and many other capacities. He was affectionally called Daddy Earl by his church family. He served faithfully until his health failed.

His love and dedication to church, family and community will be solely missed.

Services are as follows: Public viewing will be held from 6 to 8 p.m. Friday, Sept. 11, at M.D. Knight Mortuary in the Kenny Knight Memorial Chapel, 79 Old Granger Circle in Woodbine.

Graveside services will be held at 11 a.m. Saturday, Sept. 12, at Kinlaw Cemetery.

M.D. Knight Mortuary is in charge of final arrangements.