'Please help us slow the spread'

Everyone has questions. How many confirmed COVID-19 cases does Camden have today? How many residents have been tested for coronavirus? How many have received results? How many are still waiting? How many people have recovered?

And there are answers to most of those questions but those answers don’t give the full pictures as public health officials continue to say the virus is likely widespread in communities, regardless of how many confirmed cases there are. 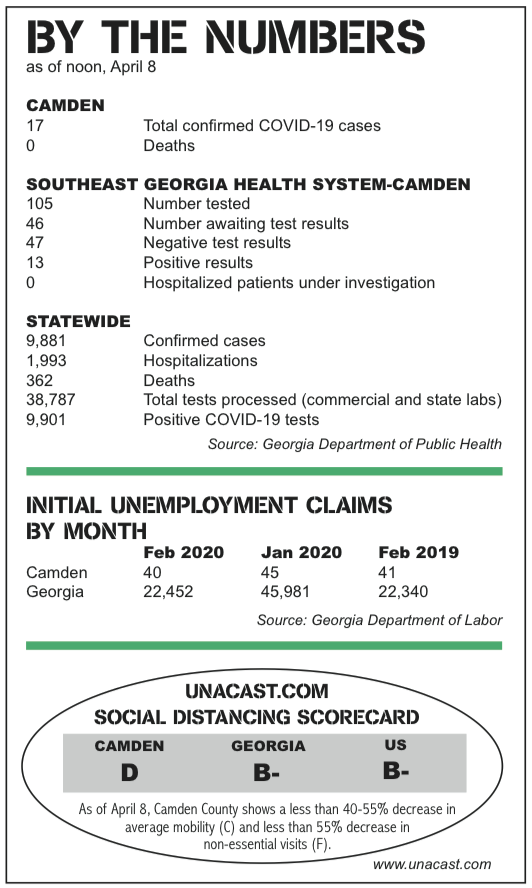 “It is important to keep in mind that lab-confirmed case numbers may not show an accurate picture of the presence of COVID-19 in our community,” Coastal Health District public information officer Sally Silbermann told the Tribune & Georgian. “Some people who have the virus do not have symptoms and would not be tested. It’s also possible that people with mild illness will not get tested. There are likely many more cases of infection than are reflected in the daily reports. We know the virus is widespread in our communities and throughout the state.”

Camden has 17 confirmed cases as of the noon update on Wednesday, about four times as many as this time last week. Kings Bay Naval Submarine Base also had at least one case as of late last week and that number may not be included in Camden’s total. Base public affairs referred all other questions to the Pentagon, which did not return a request for comment.

A small fraction of Camden’s population has been tested and Southeast Georgia Health System is awaiting results on 47 people. Test results are being returned in two to four days, according to the health system, though the health department said results may take 10 days or longer.

The majority, 60 percent, of people who have tested positive in Georgia are 18 to 59 years old and young, healthy people without any underlying health conditions have become very ill with COVID-19 and many have died.

“I can’t stress enough — COVID-19 is not an ‘old-person’s disease,’”  Dr. Alan Brown with Southeast Georgia Health System said in a release. “… Even when symptoms are mild or unapparent during what we believe to be the two- to 14-day incubation period, the disease is highly contagious. You can easily pass it to a family member or friend who could die from the virus.”

Unlike some areas in the country, Georgia is not currently tracking recovery numbers. Epidemiologists are instead concentrating on tracking cases and containing the spread of the virus.

“Our epidemiological investigation focuses on activity histories and contact tracing to limit further spread, and we provide recommendations for patients moving forward, but we do not track patients throughout their clinical presentation,” Silbermann said.

The message remains much the same for the coming days: Stay home, wash your hands, avoid touching your face, practice social distancing and wear a mask when you go out and can’t maintain a distance.

“If you’ve ever crammed for an exam, imagine doing that day after day, week after week,” Brown said. “That’s what life is like for health care workers right now, with one big difference: People’s lives depend on us, so we’re depending on you. Please help us slow the spread of the coronavirus.” 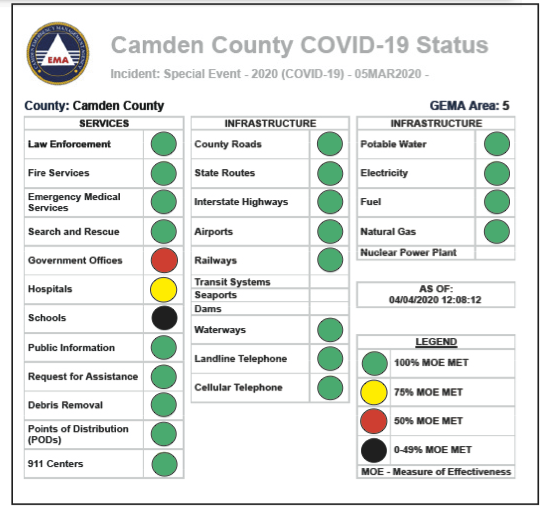 • Georgia Gov. Brian Kemp’s shelter-in-place order remains in effect through April 30 after he announced an extension late Wednesday afternoon. Kemp has also extended the public health emergency for the state through May 13. All local measures that were previously imposed by local governments were superseded by the governor’s order on April 3.

• Public safety calls in Camden associated with the virus have increased slightly but not to a point where service delivery is degraded.

• Local area has requested additional personal protective equipment (PPE). Local acute care are advising of shortages, but not considered critical as of this time.

• Camden Campus normally is licensed for 40 beds. Due to anticipated demand, 12 additional beds were slated to be delivered to Camden Campus on April 8. Total ventilator capacity in Camden is 12 units.

• All local governments are providing essential services to the public with limited interaction.

• Kings Bay Naval Submarine Base continues normal operations with internal COVID-19 measures enacted. The base confirmed on Friday, April 3 that it had one confirmed case of COVID-19.