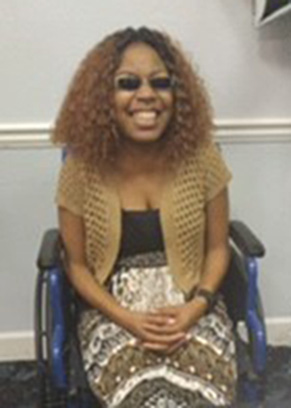 Elainna Anderson, 35, of Kingsland fought the good fight, a true warrior and finished her course on Wednesday, Feb. 17, 2021, at SGHS, Brunswick Campus.

As a child, Elainna grew up being loved and nurtured within the Sullivan, Anderson and Dawson families and others in the Camden and surrounding communities. Her schooling began at Ms. Rosa Lee Simmons Daycare, Ms. Ada Joseph Nursery, Mary Lee Clark and Matilda Harris elementary, Camden Middle, Camden County High School 2003 graduate and Coastal Georgia Community College. She was inducted into and published in the 2002-2003 National Honor Roll Commemorative Edition.

In 2019, Elainna joined the Georgia Retired Educators Association under the Camden County Retired Educators Association. She was a member of Georgia Avenue Church of God, under the leadership of Dr. Arthur Dawson Jr. and Minister Lucille G. Dawson, and attended online services with Bishop Kevin and Mary Broomfield, O’ Street Church of God ministry.

In 1996, Elainna faced a Type I diabetes diagnosis. She fought through numerous diabetic obstacles and overcame years of extensive treatments, surgeries, therapy and complications. No, every day wasn’t easy, but through it all, her life exemplified Romans 8:38-39 (NKJV) “For I am persuaded that neither death nor life, nor angels nor principalities nor powers, nor things present, nor things to come, nor height nor depth, nor any other created thing, shall be able to separate us from the love of God which is in Christ Jesus our Lord.”

This scripture reigned true in her conversation, her infectious smile, sense of humor, care for others, throughout her life and still reigns true beyond this life as she now walks into the ultimate victory into the arms of Jesus. Her love was shown in so many ways through preparing meals, life experience encouragements and inspirational gifts.

Graveside funeral services will be held at 11 a.m. Friday, Feb. 26, at Woodbine Cemetery. A public walk-thru visitation will be held from 3 to 5 p.m. Thursday at the funeral home. COVID-19 rules still apply.